Mike Shea is an ALINE athlete who kicks ass with one leg. He is not a pirate, but he likes booty hunting. His treasure trove includes 2011 Winter X Games Adaptive SBX silver medal. Mikes future hopes are to make it to the 2014 Paralympic Games in Sochi Russia. As it gets closer his hopes and dreams are slowly becoming a reality. He was happy to share his story about how he utilizes ALINEs to keep his one leg he has as healthy and strong as possible.

I lost my leg more than 10 years ago in a boating accident.While out wakeboarding with friends the ski rope wrapped around my leg. The forces were enough to sever my leg below the knee. After my accident I did everything I could to get back on a board. My passion for board sports was far too strong for me to give it all up. Within months I was back on the slopes and for the last several years I have been traveling around the world with other disabled athletes competing in World Cup competitions. I discovered ALINE 2 years ago after getting fitted with the custom Insole’s at X Games. Once we put the foot beds in my snowboard boot I found that my good leg was far less fatigued at the end of a long training day. I immediately went back to get more ALINE insoles for my shoes. I wear them all day every day. With only one leg left it’s never been more important for me to take good care of my foot. 1 foot or 2 feet, ALINE has revolutionized the insole industry and I can definitely say I am a better athlete because of them. Thanks ALINE!!!

Mike is also an accomplished fine woodworker and hopes someday he can create his own custom furniture making buisness but when the economy colapsed so did his hopes of becoming a succesfull woodworker. He put all his tools in storage and moved to Winter Park Colorado last year to become competitive snowboarder. Now he trains with a team of snowboarders at the National Sports Center for the Disabled. He has since traveled all around the world competing in Para-Snowboard World Cup Events. We wish him luck in all his endeavors. 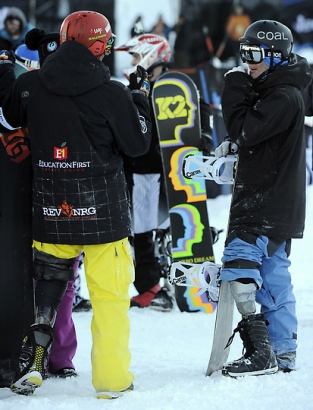