Just added to your cart

Endurance athletes are sick, mentally mind you, not physically.  Who in their right mind would impose such punishment on their bodies, on purpose?!  Ultra-marathons, Tough Mudders with electrocution on the course, Iron Man triathlons, obstacle races, multi-day team relay races and even circumnavigation of the globe as a solo-sailor.  The rise in popularity of these events shows that this sickness is spreading to pandemic levels, but who can blame them? The desire for humans to push the limit is nothing new.  Trace the lineage as far back as you would like; Pheidippides running to the city of Athens to alert the Greeks of victory in battle.  But as we all know, sadly, the Grecian courier and father of today’s modern Marathon expired upon reaching the finish.  Although this is a dramatic example, it is at the core of why ALINE Systems is in business.  Endurance athletes desire to do just that...Endure!  Against all proper thinking, against doctor’s orders and while ignoring all symptoms of pain and injury….Endure.

On the second weekend in November in Venice, FL the Rev3 70.3 Triathlon (www.rev3tri.com) took place.  This tri-skilled competition involves swimming 1.2 miles, biking 56 miles, and then running a half marathon for 13.1 miles.  Enter Jeremy “Max” Fennell (www.maxfennell.net).  Max is a 26 year old triathlete.  He is aspiring to be the first U.S. African-American triathlete to receive his Pro card and make the 2016 U.S. Olympic team.  No pressure Max!! As a former soccer player and track athlete, Max was unaware of the sport of triathlon.  In just three years his rise through the ranks has been nothing less than meteoric landing himself on the podium 5 out of 8 races in 2013.  Along with this Cape Canaveral style ascent through the stratos of triathlon comes hours upon hours of training.  Swimming through the frigid, murky open water in suburban Philadelphia, cycling thru the famous Valley Forge Park and pounding the pavement thru all reaches of the Delaware Valley.  Oh, well hello Plantar Fasciitis; how do you do Medial Tibial Stress Syndrome;  nice to meet you Rotator Cuff, welcome to the party Hallux Valgus/Bunions.  While all of these overuse injuries may seem severe, they are ALL reversible and avoidable.  Improper and unsupportive footwear, unnatural surfaces and moving inefficiently and out of alignment are the cause...and ALINE is the cure! 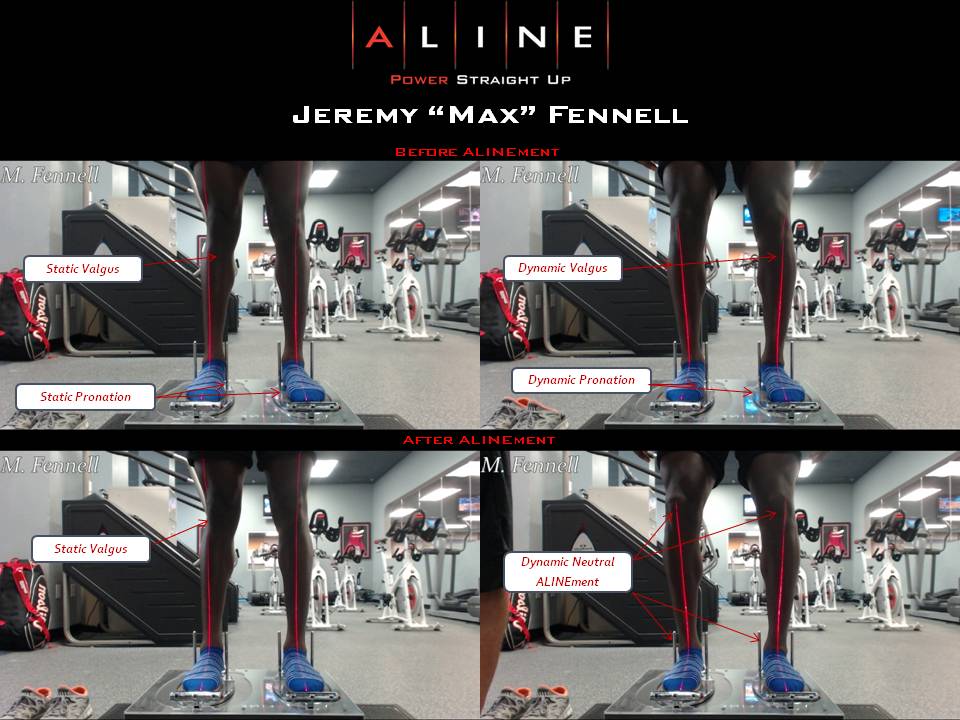 Above you will see Max’s ALINEment Evaluation and Analysis performed at the ALINEment Center on IMG Academy’s (imgacademy.com) campus.  We place the athlete’s in a static and dynamic position to illustrate basic movement patterns and functional biomechanics.  Through this evaluation we are able to identify mis-alignments, movement inefficiencies, muscular imbalance and improper patterns leaving the athlete at a higher chance for injury.

In the top 2 images, Max has extreme levels of arch collapse in both feet with excessive pronation patterns as shown by the medial malleoli (ankle bone) slamming into the middle post.  Follow the laser upwards and you will see valgus (knock-knee) knee patterns both statically and dynamically.  How does an athlete of his caliber generate such power and results from feet that more closely resemble powder skis then a strong, powerful, athletic foot?!

In row 2 we now do the same evaluation, but we place the athlete on top of ALINE Foot Suspension System Insoles. Notice the change in the bottom right image...neutral balance of the feet and ankles between the posts.  Knees tracking directly over the first and second toes with laser bisecting the tibial tuberosity and patella.  This is what will produce real balance and power without compensation.  This is ALINEment!!

The demographics tell the story of the endurance population in America.  On average, triathletes are from high socio-economic backgrounds with median incomes of $126,000.  Average age: 38, 59.6% Male, 39.5% Female.  52.9% of active population between the ages of 30-44.  49% report white-collar jobs while 19% report professional jobs such as doctor, lawyer or accountant.  These numbers are transferable across the entire endurance community; astronomically higher than our orthodox American sports. This begs the question...how do such smart people make such bad decisions about their physical, kinetic health? Type A, hardcharging, goal setting, company owners, and champions of the corporate world are now attempting to dominate the world of endurance only to wear themselves down to the bone, literally.  The same characteristics that has driven their professional success is also the source of their “itis”...tendonITIS, plantar fasciITIS, and arthrITIS!

As Max will soon find out ALINE Systems can bring you to the next level. Max has not made the Olympic Team.  He is not a pro.  On Sunday’s Rev3 70.3 Triathlon Max placed a disappointing 9th place in his age group.  On Monday, Max was introduced to ALINE.  2014 should be interesting...